What has your role been in developing Exmark’s line of propane powered lawn & garden equipment?

While I have been only one of the driving forces behind the implementation of propane powered mowers, my personal vision and focus has been on the development of an EFI system for propane. The vision was not only to incorporate the fuel efficiency of an EFI system but also to reduce or eliminate most, if not all of the common issues associated with a conventional propane carbureted fuel system.

I had been working on propane EFI systems in the years just prior to our work with Kohler on the development of their EFI-propane powerplant. This effort culminated in a prototype EFI system on a Lazer Z mower in 2009. For a number of reasons, the project was placed on-hold, but as a result of the experience building that prototype, I lobbied both Delphi and Kohler to develop a dedicated EFI system for propane. Since a majority of the components were common with the gasoline EFI system, by changing the injectors and developing a propane-specific fuel map, we had a modern closed-loop EFI system for propane. We were very fortunate Kohler also recognized the potential and developed the first engines using the system, which are the engines we’re using today.

How long has propane engine fuel been in use for agricultural and landscaping applications?

I can’t speak to agriculture, overall, but in landscaping applications, while I can’t offer the exact date propane-converted engines were first available, but I am aware of conversions that existed in the mid-1990s.

Why is propane engine technology beneficial for the landscape industry?

To put it simply, propane allows for reduced overall fuel costs, along with reduced emission of greenhouse gasses. It can help owners reduce their carbon footprint by releasing fewer harmful emissions, and it achieves this with no sacrifice in productivity.

What advantages are there in using the new Kohler EFI propane engine now available on Exmark mowers?

The Kohler EFI propane engine is capable of significantly reducing fuel consumption and emissions. In fact, we’ve found the engine to deliver up to 25-percent greater fuel economy compared to a similar converted engine. Not only does the increased fuel efficiency reduce operating costs, in burning less fuel, the new engine produces fewer emissions as well – a win-win proposition.

The EFI system on the Kohler engine also delivers easy, no-choke starting with stronger performance in a wider variety of running conditions. Since the EFI system automatically adjusts to variables such as elevation and temperature, performance is much more consistent than a converted, carburetor-equipped propane engine.

What advantage is there in using the vapor withdrawal propane tanks used on Exmark equipment? 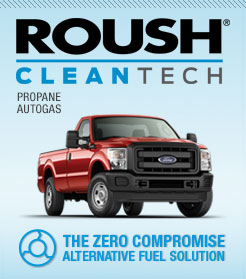