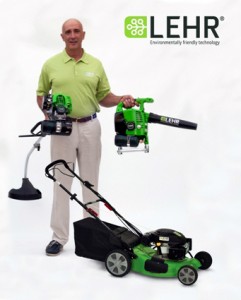 Captain Bernardo J. Herzer, the founder and CEO of LEHR Incorporated, is committed to the application of environmentally friendly technology and finding green energy solutions for retail and commercial products.

Captain Herzer developed, commercialized and patented the use of an eco-friendly, 16.4 ounce propane canister to fuel small engines like the ones that power hand held lawn and garden tools. This “twist-n-go” fueling system at the heart of the LEHR Eco Series is truly a clean air innovation in a sector that is long overdue for a clean air solution.

Captain Bernardo Herzer, the Founder and CEO of LEHR Incorporated is committed to the application of environmentally friendly technology and finding green energy solutions for retail and commercial products. Captain Herzer developed, commercialized and patented the use of an eco friendly, 16.4 ounce propane canister to fuel small engines like the ones that power hand held lawn and garden tools. This “twist ‘n go” fueling system is at the heart of the LEHR Eco Series and is truly a clean air innovation in a sector that is long overdue for a clean air solution.

Bernardo Jorge Herzer has spent a large portion of his life at sea. As a licensed ship’s captain, he developed a passion and a deeply felt connection to the ocean, logging over 40,000 nautical miles across the globe including trips to Australia, the Red Sea, the North Sea, the Caribbean, the waters of Central and South America and the North Sea. While doing environmental research for Her Majesties Royal Fisheries, Captain Herzer was shocked and heartsick at how much damage had been done to the underwater terrain of the North Sea by the not so eco friendly commercial fishing industry. He noticed that among other things, the residue spillage from the use of gasoline on the vessels had contributed to the degradation of the area.

Humbled by the impending birth of his first child, Captain Herzer returned to Los Angeles, inspired to do something to benefit the environment on a global scale. At sea, he had become highly skilled at solving engineering problems where creativity is often heightened by the need for an eco friendly solution using the limited resources available. Having already used propane to power small engines on several other ships in his years at sea he used these skills to research how to run a smaller generators on clean burning propane, thus lessening the impact of gasoline on the environment. With that knowledge, determination and a lot of hard work, a plan emerged and two and a half years later a patent was awarded for the technology to use propane to run small engines like the ones that power a gasoline string trimmers.

When you enter Captain Herzer’s office, there are posters, prototypes, models and renderings of different applications using twist ‘n go fueling including lawn and garden tools like a grass trimmer, and an eco blower. The company, however, like its founder, is already thinking about where the next breakthrough will come from. “We practice a green strategy and propane is an eco friendly green gas which is good. ” says Captain Herzer. “But we won’t stop there. LEHR will continue to develop ideas and solutions that allow us to replace old technology with greener, cleaner products whose use reduces or eliminates the deterioration of our planet for future generations.”

In addition to his stewardship of LEHR, Captain Bernardo Jorge Herzer is an Editor-at-Large of Ocean Realm Journal. He lives and works in Southern California, enjoys spending time with his family and of course, his first love – the sea.

Do your products have less power than gasoline powered products?

One horsepower is one horsepower no matter what the fuel source is. Our propane powered eco products deliver the same power and performance as their gasoline counterparts without the negative effects associated with gasoline.

Propane is a clean, green alternative to gasoline and using it will have less of a negative impact on the environment than gasoline. Being green can be defined as the strategies and practices that focus on reducing energy waste and increasing operating efficiency.